You have contacted Boulder Tea House!

In 1987, during his first visit to Boulder, Mayor Maksud Ikramov announced that Dushanbe planned to present our city with a Teahouse to celebrate the establishment of sister city ties. From 1987 -1990, more than 40 artisans in several cities of Tajikistan created the decorative elements our Teahouse, including its hand-carved and hand-painted ceiling, tables, stools, columns, and exterior ceramic panels. Often these skills are handed down from generation to generation within families. Lado Shanidze served as chief architect.

In Central Asia, teahouses serve as gathering places where friends meet to talk or play chess over a cup of tea. Many teahouses are traditionally decorated with Persian art, characterized by the use of motifs from nature – stellar, solar, and floral, by the repetition of patterns, by form over representation and pattern over detail, and by lavish decoration and color. Our Teahouse accurately reflects this artistic tradition that dates back nearly 2,000 years. The master woodcarvers, including Manon Khaidarov and Mirpulat Mirakhmatov who helped reassemble the Teahouse here, have carved their names in the ceiling. The artisans who have painted it have written their names on a green painted area above the entry to the kitchen. A message carved in the ceiling reads “artisans of ancient Khojand whose works are magical”.

Eight colorful ceramic panels, created by Victor Zabolotnikov, grace the building’s exterior and display patterns of a “Tree of Life” enclosed by a mihrab motif (a niche in a mosque indicating the direction of Mecca.) Inside the Teahouse are eight large, intricately carved white plaster panels, designed and executed by Kodir Rakhimov, whose contemporary oil paintings are framed by this art of Persian antiquity. The central pool features seven hammered copper sculptures by Ivan Milashevich, based on a 12th century poem, “The Seven Beauties”, in which a princess from each of seven different nations narrates a fable that expresses important cultural values.

In the 7th Century BC, the area we now know as Tajikistan was settled at the eastern periphery of the Persian Empire. Situated a bit south of the Silk Road trails, the area has seen invasions by Alexander the Great, Mongols, Arabs, Turks, and Russians. Today, Tajikistan, with a population of 7 million, is about the size of Iowa, and is bordered to the east by China, to the north by Uzbekistan and Kyrgystan, and to the south by Afghanistan. At the western end of the Himalayas, its terrain is 93% mountainous, with peaks towering to 24,000 feet. The Tajik language is like Persian. Prior to being named capital to the Soviet Republic of Tajikistan in 1929, Dushanbe, which signifies Monday, was a village of 400 – 600 people and was the site of the weekly bazaar, held on Mondays. Dushanbe now has a population of 600,000 and its people are struggling with the aftermath of civil war following the collapse of the Soviet Union in 1991. 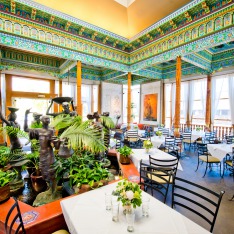 Food and Details in Boulder