You have contacted Crystal Kouri!

Best known for her work on the red carpet, Crystal has made celebrities beautiful for the Oscars, Emmys, SAG awards and American Music Awards, along with dozens of movie premieres and junkets. Creatively inclined, she has also created faces for the catwalks of Fashion Week. As a licensed cosmetologist, the young artist began her studies at the best schools in New York City and Los Angeles, including the Vidal Sassoon Academy. Crystal soon landed an apprenticeship at a top hair salon in Los Angeles and was privately trained to cut hair by the former Artistic Director of the Vidal Sassoon Academy and became a Redken colorist.

Wanting to be multi-faceted in the beauty industry, Crystal began taking courses for makeup and assisting for top celebrity makeup artists such as Mary Phillips. Never forgetting the importance of freelancing, this hard worker uses her industry downtime to work with high end brands such as Láncome, Chanel, Smashbox, Estée Lauder, Armani, Beautyblender and Frederick Fekkai.

Ms. Kouri has carved a niche for herself in the beauty industry and continues to engage in amazing pursuits of creativity. 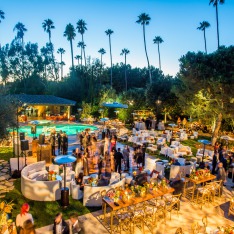