You have contacted Joe Park Films!

Joe Park Films is, unsurprisingly, owned and operated by Joe Park. Me.

I was born and raised in Orange County, California near Huntington Beach. Growing up, I spent all of my free time at the beach or at the movies. Not too much has changed since then except now I’m behind the lens and making films of my own.

I'm lucky enough to, now, live in beautiful San Diego, but my love for travel takes me out of town as often as possible. I've been extremely fortunate to travel extensively in the United States making films, and have had the great fortune to film weddings in Europe, Australia, and Canada as well.

I’ve learned many things during all of my shoots (literally, hundreds, since I’ve been shooting since 1999), but the most striking thing I’ve learned is that each couple has their own unique story: quirky, romantic, crazy happenstance. Each story that I’ve captured has enabled me to use my creativity in telling the story.

The long and the short of what you need to know about me: I love what I do and bring that passion for storytelling to every wedding I shoot.

Storytelling through film… it’s what I do! 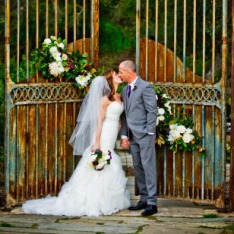