From a young age Jojo was immersed into a musical culture. Having a father who has been a professional musician for most of Jojo’s life and a mother who has performed with a singing group, he has grown with a great appreciation for the musical arts. At the age of 9, Jojo started playing piano due to his love for classical piano. As he grew older, he started playing more rock music as well and through this transition he picked up multiple other instruments including guitar, drums, and singing. He started to perform professionally as a backup at 14 years old. Through the years he has expanded his talents and roles in various music acts. He has played anything from solo gigs up to playing with a full band. He has played from coast to coast within the US; playing venues and private parties in such places as Las Vegas, Dallas, San Diego, and Rhode Island.
Jojo Hahn at a Gig

He plays an ecclectic array of cover music, pulling from hundreds of songs, covering such artists as Cat Stevens, Van Morrison, Dave Matthews Band, Collective Soul, and Coldplay. Most of the music he performs at this time is geared toward: Parties, restaurants, weddings, and venues which desire live music to create an ambience.

Jojo has recently moved to San Diego, performing at such places as Old Venice Italian Restaurant and on the San Diego Harbor Excursion boat tours. He is also currently forming and working a band project which will start performing within the next few months. He is excited to see this group of seasoned musicians grow together and start to perform both covers and original material. 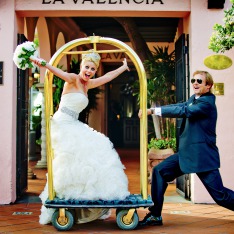