James Robert Dunn started his career in 1967 as a sales representative for IBM. During a sales call to a jewelry company in Malden, Massachusetts, Jim picked up a magazine about the jewelry business and became intrigued. When his schedule allowed, Jim took correspondence courses in gemology, and went to New York to learn about diamonds and colored stones. “I bought a little microscope and I was playing scientist at home,” he says.

While at IBM, Jim met his future wife Ann Marie Pelliccia, who was working as an executive secretary. Ann Marie, like Jim, was also driven by an entrepreneurial spirit. She was ten years old when her family immigrated to this country from Italy. It didn’t take long for Ann Marie to master the English language and become the interpreter for her father’s cabinet making business. From the age of 11, she went to work every day after school with her father until she graduated high school and soon after, she joined the team at IBM. “It was IBM that helped us forge our philosophy about customer service and business ethics” says Ann Marie.

The couple married in 1969 and together, they decided to take a chance and start a jewelry business. With their savings of $10,000, the couple purchased a small house in Hanover, Massachusetts and converted it into their first jewelry store, The House of Gems.

During the first year, their store was burglarized and every piece of jewelry was taken, including customers’ repairs. To make matters worse, the Dunn’s were in between insurance policies. The couple went from door to door informing and reassuring each client that their prized possessions would be replaced. Ann Marie and Jim paid for the stolen jewelry out of their own pockets to preserve their reputation for integrity and trust. The Dunn’s misfortune turned out to be a blessing in disguise. Word spread when the couple made good on their promise and business began to grow by leaps and bounds. The House of Gems soon outgrew its tiny location. Jim and Ann Marie relocated the store to a nearby mall in South Weymouth, Massachusetts and changed the name to J.R. Dunn Jewelers, placing an emphasis on the importance of the family-owned and operated business.

In 1978, the couple relocated to South Florida and opened a small jewelry boutique, which served a select clientele by appointment only. This is when the Dunn’s were fortunate enough to have Robert Pelliccia, Ann Marie’s brother, come on board at the age of 18 and eventually start creating one-of-a-kind custom creations for their discerning clients. It didn’t take long for J.R. Dunn Jewelers to outgrow its location once again. That brought about the monumental decision to purchase a 6,000 square-foot building on Federal Highway in Lighthouse Point, Florida.

In 2007, the H. Wayne Huizenga School of Business and Entrepreneurship at Nova Southeastern University inducted Jim Dunn into its Entrepreneur Hall of Fame. Jim Dunn's honor came as a complete surprise even though in 2002 he was honored with the Sun-Sentinel's Excalibur Award for "Small Business Leader". Jim is actively involved in numerous charitable organizations and dedicates a lot of his time to the Boys' and Girls' Club of Broward County. In 1996, Jim organized "Dunn's Run" and over the past 11 years has raised over $1 million for the Boys' and Girls' Club.

Today the Lighthouse Point store has expanded to 8,000 square feet. Jim, Ann Marie and their son Sean run the business together. Sean earned his Bachelor of Science in Business Management from the University of Florida as well as his gemological degree from GIA. Jim credits Sean with much of the technological advancement achieved at the store, including the creation of the company’s e-commerce website, JRDunn.com, nearly seven years ago. Fortunately, the faith Jim and Ann Marie placed in Sean paid off and JRDunn.com now serves clients in over 20 countries.

“My father always told me I could be whatever I wanted,” says Sean. “He has given me so much latitude to try new things and the confidence to take steps forward. One of the most entrepreneurial things about my father is that he has no fear of taking risks. He’s not afraid to try new things. If it doesn’t work, it’s not going to devastate him. Tomorrow he’ll wake up with another great idea and go for it.”

In addition to being a close knit family that supports one another, the Dunn’s have forged many great relationships with their employees, clients and in the community. “If you’re in business and the people in the community are supporting you, then you should go back and support the community,” says Jim. The Dunn’s credit these relationships for having allowed J.R. Dunn Jewelers to persevere and thrive even in tough times.

While a lot has changed since Jim and Ann Marie started the business in 1969, their values haven’t. On any given day you are likely to find multiple family members on the premise at J.R. Dunn Jewelers. Even Ann Marie’s mother, Fernanda, at the age of 86 might be the one who greets you at the door. Every guest entering the store today is treated with the same standards of excellence and friendly service established many years ago in that tiny house in Massachusetts. It is truly a family affair... 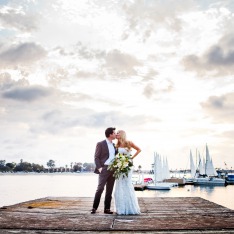