You have contacted Natalie Moran Clegg!

Soprano Natalie Moran, a native Southern Californian, is best known for her vocal quality, comedic character roles, and her musical and theatrical dedication. Natalie holds a Bachelor of Music in Vocal Performance from the University of Southern California Thornton School of Music and has performed throughout the US and Europe in classical, jazz, pop, choral, and musical theatre repertoire.

The summer of 2006, Natalie attended the Tyrolean Opera Program located in Maurach am Achensee, Austria. She spent a month in the Austrian Alps performing, studying German, learning repertoire, and studying with Julia Faulkner, Korby Myrick, Kathryn Wright of the Deutsche Oper Berlin, Robert Schliefer, and Elizabeth Bachman. She was able to get a much better understanding of the German language, work on advanced repertoire, acting skills, and vocal techniques. Her time there was invaluable. The summer of 2008 was spent at the International Lyric Academy in Viterbo, Italy. Here, she was able to perform in the Tuscia Opera Festival and Viterbo’s Notte Bianca. She sang in Mozart’s Die Zauberflöte with Syrian soprano Lubana Al Quntar in the Piazza San Lorenzo. Natalie spent the month working with Maestro Stefano Vignati and strengthening her Italian skills while working on her Italian repertoire. She also traveled to Montefiascone to perform in La Bohème and La Traviata. This, too, was a memorable experience. The summer of 2011 and 2012 were spent participating in the Riverside Lyric Opera Program and taking part in masterclasses with such famed performers as Suzanna Guzman and John Duykers. She participated in LA Vocal Lab in the summer of 2014 in Los Angeles to work on her vocal improvisational skills. 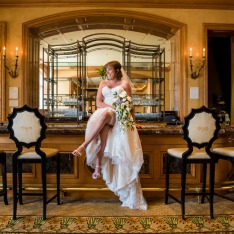