Roger grew up on a farm in Mohawk Indian country in upstate New York. In the years following High School, he lived for a year in the Netherlands as a Rotary Exchange student, attended the U.S. Naval Academy in Annapolis, Maryland, graduating with distinction in 1979, and served as a Surface Warfare Officer in the U.S. Navy.

Following his service in the Navy, Pastor Roger attended Westminster Theological Seminary in Philadelphia, Pennsylvania, earning a Master of Divinity and the Jesuit School of Theology in Berkeley, CA, where he earned a Master of Theology.

Pastor Roger served as Pastor of the Memorial Baptist Church in Cortland, NY, before returning to the U.S. Navy, this time as a Chaplain with the First Marine Division at Camp Pendleton, and with Marines who guard U.S. Embassies all around the world. He also served with Sailors aboard the USS RONALD REAGAN (CVN-76) (participating in the ship’s first two deployments to regions in the Western Pacific, the Indian Ocean, and the Persian Gulf), and as Base Chaplain at the Naval Air Weapons Station in China Lake, California and at the Marine Corps Base in Quantico, Virginia.

While in San Diego in the early 1980s, Roger accepted Christ at Saint Stephen’s Church of God in Christ, under the preaching of Bishop George McKinney and later experienced significant spiritual growth at Calvary Chapel San Diego, under the leadership of Pastor Mike MacIntosh.

Pastor Roger became well-acquainted with New Venture Christian Fellowship while working with Pastor Shawn on the2003 Mission to San Diego with Billy Graham. In 2013, Roger retired from the Navy, and soon after joined the staff at New Venture, where he is thrilled to serve as Pastor of Discipleship. 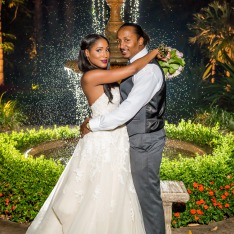