You have contacted Robin Henkel!

Robin has opened shows for:

John Hammond, Eddie Kirkland, The San Diego Symphony, Lowell Fulson, Johnny Almond, Buddy Miles, Big Jay McNealy, Jimmy Witherspoon, Sha Na Na, Papa John Creach, Dirty Dozen Brass Band
Robin Henkel is a futurist and a historian.
-LA Times
Henkel is already playing a shuffle that is neither slow nor fast--a strut, and it is extremely seductive ...Henkel proceeds to play a fast jump progression, much like one of Robert Johnson's fiery paced songs. As with Johnson, it is hard to imagine, if you close your eyes, that there is only one guitarist at work. You can almost hear the scratches on the 78.
-San Diego Reader
Robin's live shows are nothing short of inspirational. There is somthing genuinely raw, base and animalistic about his gut-wrenching, honest music.
-360 Degrees
Robin Henkel promises nothing, if not a surprise here and there. This is just the way the San Diego
native is. He wants to shake things up, so expect the unexpected. As a guitar player, Robin can play blues, jazz, funk, country swing, Hawaiian and Latin music. He borrows from each of those styles when he performs and sometimes even surprises himself with the musical direction his songs take."I like playing music", he says. It just feels good. Henkel's strength is when he picks up that sawed-off pipe fitting and puts it on his baby finger and then lays it on the strings of a resonator or Dobro. All of a sudden the awkward kid from Serra Mesa is transformed into the man in the corner at the Delta house party who commands everyones attention. When Robin plays slide guitar, he steels the show. You probably haven't seen anything like this for years and you may not see it again anytime soon. Though he leans toward playing jazz these days, he won Best Blues CD at the San Diego Music Awards (2000) for his "Highway" recording. "I don't quite know how I did that," he says "there's not much blues on it." To make amends, Henkel has vowed to record a blues album next. Maybe.
-Mike Kinsman 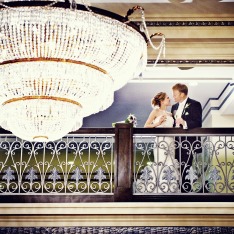