Hailed as “San Diego’s go-to choral ensemble” by the San Diego Union-Tribune (July 2012), SACRA/PROFANA is rapidly gaining a reputation as a dynamic new presence in American choral music. The “young and stylish choral group” (KPBS) has been widely celebrated in the local press for their boldness of vision. KPBS identiﬁed the group as “choral music for the iPod generation” (April 2012), and critic Kenneth Herman wrote: “I laud their bravery and musical conviction in giving life to such demanding and compelling works.”

Since their debut in 2009, SACRA/PROFANA has championed seminal works of modern choral repertoire rarely (if ever) heard in Southern California. These include major works by Arnold Schoenberg, György Ligeti, Steve Reich, Vincent Persichetti, Ernst Krenek, Nico Muhly and David Lang. In April 2012, critic Garrett Harris wrote in the San Diego Reader, “San Diego is fortunate to have a group like SACRA/PROFANA bringing us new music that is of high quality”. The 24-voice ensemble has collaborated with many of San Diego’s leading arts institutions, including the San Diego Symphony, Art of Élan, and the San Diego Museum of Art.

With a repertoire including everything from Mozart to Schoenberg, as well as Prince, Maroon 5 and The Smashing Pumpkins, SACRA / PROFANA continues to defy genre classiﬁcation. The ensemble’s debut album, entitled Elegies & Ecstasies, was released on iTunes in May 2012. 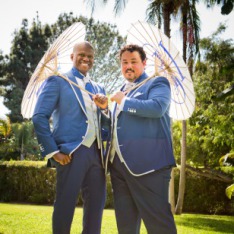