Born in Birmingham, Alabama, Sarah has always had a love for music. At the age of 6, she began violin lessons and played in youth orchestras for several years. Her focus was primarily classical for the 10 years she studied. During that time she also tried her hands at the piano, taking lessons for 3 years.

She took a break from music in college, following her other passion, theatre. She studied at the University of North Carolina School of the Arts where she received her BFA in Costume Technology. After graduating in 2004, she moved out to San Diego, California to work for the La Jolla Playhouse and the University of California San Diego Theatre Department.

In September 2006, Sarah and a friend went to check out a Ukulele group at a pizza parlor in Encinitas, CA. Little did she realize that it was going to be such a life changing event. As Sarah put it “It was so amazing to go to this place where there were at least 40 Ukuleles, everyone was so happy, the room was filled with such joy. I just had to be a part of it.” As serendipity would have it, Frank Leong, the group leader, was starting group Ukulele lessons that October 2006. Sarah signed up and has been hooked on the uke ever since.

In 2009, Sarah was given the opportunity to record the song “Waikiki” on a compilation album of Hawaiian tunes (Ka Hula O Na Niu), produced by Tim Coffman. Her contribution was well received and it was the start of a new direction. In January of 2010, Tim asked Sarah to record her own album and with the help of several talented musicians, ‘Have Uke Will Travel’ was released October 15, 2010. Since it’s release Sarah continues to play gigs and share the joy of the ukulele with everyone she meets. 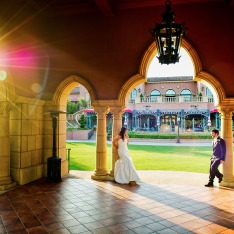