You have contacted Von Kiss!

There is only one Von Kiss. She is a phenomenal DJ/Producer based out of Southern California. Growing up in San Francisco with a music/dance loving Mom, she was exposed to various musical genres such as Freestyle, Booty Bass, House, Hip Hop, Funk, Oldies, Banda, Cumbias… to name a few.

Von Kiss was fascinated by nightclubs before she had even set foot in one. As a kid she dreamed of owning her own nightclub, there was just something about people getting together and dancing the night away to dope music that really intrigued her.

Once VK finally began her nightclub adventures she quickly became fascinated with the DJ's role in providing the soundtrack for the night. While attending San Diego State University she picked up a side job of go-go dancing, and this is where she really got her chance to befriend and connect with DJ's.

With the guidance of one of her beloved DJ friends Yusef, Von Kiss walked into Guitar Center and bought two Technics, a mixer, and some headphones. Von Kiss landed her first club gig in 2005 and has since become an International Club DJ sensation. She has played along side artists such as Fedde Le Grande, Carnage, Mikix The Cat, LMFAO, DJ Funk, Brenmar, Shortee, 6Blocc, Caspa, Trolley Snatcha, Lil Kim, Rye Rye, Keoki, Cazwell, Barrington Levy, Redman, Problem and many more!

Von Kiss is most known for throwing down a festival style BASS heavy set, often surprising the crowd with a variety of genres. It is her primary goal to pack the dance floor and leave a lasting impression on the club goers.

Aside from her relentless DJ schedule, VK manages to make time for production. Over the past 3 years she's released a few Original Tracks (one of which is a collaboration with 6Blocc and available on Beatport). She is now focused on her first official EP, which should be released within the next year. With a rapidly growing fan base, Von Kiss is sure to be playing in a city near you soon! 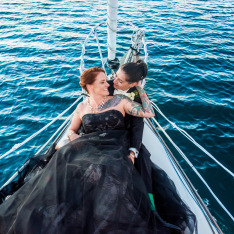