Bling Divas Entertainment was officially founded in 2008 by trained actress, dancer and choreographer, Tatiana Turan. After years of working as a free-lance choreographer for many of Southern California’s top event planners, Tatiana made a smooth transition into now providing full productions for her clients.

Since 1993, Tatiana has been staging choreography around the world for private corporate events, casinos, trade shows, conventions and long running productions. Most recently, Tatiana had the privilege of being hired to choreograph the first wedding dance for acclaimed actress, Anne Hathaway and Adam Shulman. Her work has been seen at many Southern California events as well as stages in Japan, Canada, Italy, Spain, Las Vegas, New York and Los Angeles. From stages at Disneyland to 4,000 person stadiums, Tatiana has been providing venues, event planners, recording artists and the corporate world the very best in dance & atmosphere entertainment.

Tatiana, herself, has appeared in multiple musical stage productions, television and film. Dancing from the time she was five years old, she caught ‘the bug’ at a very young age and eventually parlayed into acting and singing. She received her BA in Drama and was one of only four students from her class awarded Honors in Acting from the University of California, Irvine. She has been consistently working in the entertainment field since, blessed to be doing what she loves!

When Tatiana made the decision to form her entertainment company and expand her services to producing her own shows (some of which include these themes: Showgirls, Moulin Rouge, Ballroom, Salsa and Charleston), she found that she quickly rose to being one of the top event entertainment companies around. Hiring and working with the very best dancers in the business, as well as investing in the most exquisite custom made costumes around! Her attention to detail and her love for all things beautiful have been a remarkable gift when it comes to producing her shows. Her professionalism, creativity and ability to produce the very best in dance entertainment has earned her company, Bling Divas Entertainment, a wonderful reputation in the Southern California area.

In addition to her acting, dancing and choreography work, Tatiana is also a professional celebrity impersonator of Angelina Jolie and Jennifer Lopez (two of her main characters). Check out www.blingdivas.com to view Tatiana’s impersonation and look-alike work. You might even get a few more surprises!!

Tatiana’s is also a PMA GOLD Certified Pilates instructor with her own studio, To The Core Pilates www.tothecorepilates.com in Sherman Oaks, CA. 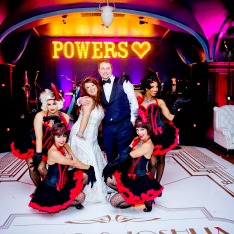