You have contacted Julie Ireland Dressmaking!

When I was seventeen I saw a sheepskin coat in a leather clothing store in Los Gatos. The coat sported a price tag that was much more than I could ever hope to afford. As I continued to admire the coat, I determined that I would make one, and in the next few weeks made my way over the hill to The Dead Cow, a since closed leather shop near Santa Cruz where I purchased five sheep skins, a deer hide, five antler buttons, a pair of leather shears, a leather lacing needle and a book on the finer points of sewing leather. The sheepskin coat was a huge success and in no time, I was taking orders.

My creativity as a designer had sprouted, but not yet my practical sense of money vs. time, and so with about 12 leather coats under my belt, I returned to my day job. I still have that leather lacing needle and those shears…

Ten years and two sewing machines later, I sewed my first gown. It was a Yves Saint Laurant strapless, drop waisted ball gown of black taffeta and velvet with a silk lace sleeved bolero jacket, and while it took over one month of sewing every night after work to complete, the results were so impressive (even to me!) that I found myself often returning to the notion of dressmaking not only for friends and family, but for a living.

At the time I was the proprietor of a business completely unrelated to fashion, design, or sewing and in hindsight can only say that there is a good deal of truth in the notion that periodically resting one’s attention on an idea has everything to do with bringing that idea into being.

Sewing above all has not only taught me the virtues of patience, but has also given me a regard for design and the thoughtfulness behind the architecture of a garment, which in some cases is where one has to go to see the reason and sometimes genius of any one designer’s work.

For the better part of my lifetime I have been in an ongoing pursuit of the practical knowledge of design, pattern making, construction, textile manufacture and sewing techniques - both machine and hand - which has given me the ability to move naturally from measurements to block to muslin to pattern to finished garment.

I love what I do, and invite you to browse my site, and encourage you to contact me by phone or email should you wish. 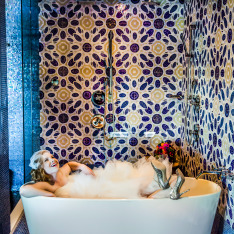