Franck Houdin has been cutting hair since he was 15 years old. In 1983, he worked at hair shows and conventions in France, and then served one year in the French military. After leaving the military, he worked a winter season at a hair salon in the Alps in France, and then trained under his mentor and old boss for 14 years, where he met his wife, Maryline (pronounced maar-ee-leen - don't forget to roll that French "r"). in 2000, Franck and Maryline moved from France to the United States, where he worked at the Jose Eber Salon in Beverly Hills, Los Angeles, because he wanted to "keep in touch with fashion". Franck and Maryline moved after 4 months to San Diego to work at The Four Seasons Aviara, right here in Carlsbad. Seven seems to be the magic number for Franck Houdin because after having worked at Jose Eber in Carlsbad for 7 years, he decided to move. More than anything else, Franck wanted freedom and independence; he wanted to move away from a large company filled with different colorists and stylists and he wanted the autonomy to color and style the way that he wants to. So,withPaige,Audrey,Melissa,Maryline Franck took a giant leap of faith and opened up the Franck H. hairsalon
in Cardiff by the Sea. The Franck H. hairsalon is a quiet, understated, Euro-chic salon where you feel at home the minute you walk in the door. You are greeted by the team offered a drink and whisked away. Voila! One hour later, you emerge... glamorous and sexy with added confidence and sass. If you are hoping to cover up the gray in your hair, Franck and Maryline offer "Balayage" -- a highlighting technique that has been used in France for the last 30 years. Franck will tell you in a way that only a frenchman can, that this treatment "respects the texture and integrity of your hair". For Franck Houdin, it is all about respecting what is God-given. "Don't try to be what you cannot be," he says. If you have curly hair, keep it curly. Use a flat iron to acheive a different look, but have a cut that allows you to wear your hair naturally." Franck Houdin is a master at what he does. You need to have a haircut that is "sublime" or else it will not do. Inevitably, when you come back from a haircut, you always say, "Well, we'll see how it looks when I dry it myself." Well, with a "Franck haircut" you can be sure that you will look as good the next day as you did when you walked out of the salon. The Franck H. hairsalon is open to men, women and children. Take a little time to indulge in the zen-like sanctuary and pamper yourself. 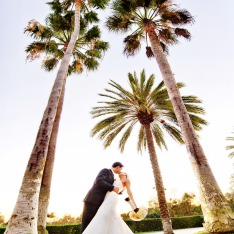