Oscar de la Renta is one of the world's pre-eminent designers. The company was established in 1965, and currently produces a line of accessories, bridal, home products and fragrance, in addition to its signature women's ready-to-wear collection.
Company Overview
Oscar de la Renta left his native Dominican Republic at the age of eighteen, to study painting at the Academy of San Fernando in Madrid. While living in Spain, he became interested in the world of design and began sketching for leading Spanish fashion houses, which soon led to an apprenticeship with Spain’s most renowned couturier, Cristóbal Balenciaga. Later, he left Spain to join Antonio Castillo as a couture assistant at the house of Lanvin in Paris. In 1963, he came to New York to design the couture collection for Elizabeth Arden. In 1965, Oscar de la Renta began his signature ready-to-wear label. Today the company also produces a bridal collection, a line of fragrances, a home collection and a complete range of accessories, including handbags, shoes and jewelry. In 2008, Oscar de la Renta opened its first international stores in Athens and Madrid, and has continued its expansion with the opening of Dubai in 2009. The company plans to open a boutique in Moscow in 2010.

Oscar de la Renta’s talents have received continual international recognition. In addition to the honor of receiving the 2009 Superstar award from The Fashion Group International, Oscar de la Renta was the co-recipient of the CFDA (Council of Fashion Designers of America) Womenswear Designer of the Year in 2007. In 2006, Oscar de la Renta received the Lifetime Achievement Award at Parsons’ 58th Annual Benefit and Fashion Show in 2006. He received the CFDA Womenswear Designer of the Year Award in 2000. In February 1990, he was honored with the CFDA Lifetime Achievement Award. From 1973 to 1976, and from 1986 to 1988, he served as President of the CFDA. He is also a two-time winner of the Coty American Fashion Critic’s Award and was inducted into the Coty Hall of Fame in 1973. From 1993 until 2002, Oscar de la Renta designed the haute couture collection for the house of Pierre Balmain, becoming the first American ever to design for a French couture house. Oscar de la Renta has been awarded the French Legion d’Honneur as a Commandeur.

The Dominican Republic has also honored its best known native son as one of its most distinguished citizens, with the order al Mérito de Juan Pablo Duarte and the order of Cristóbal Colón. In 1996, Oscar de la Renta received the Lifetime Achievement Award from the Hispanic Heritage Society, and in 2000 he marched down Fifth Avenue as Grand Marshal of New York City’s Hispanic Day Parade. Also in 2000, he received the Gold Medal of Bellas Artes from the King of Spain.

Oscar de la Renta is a tireless patron of the arts. He serves as a board member of The Metropolitan Opera, Carnegie Hall and Channel Thirteen/WNET. He also serves on the boards of important institutions such as New Yorkers for Children, the Americas Society, and is presently chairman of the Queen Sofía Spanish Institute. Oscar de la Renta has also helped build a much needed school and day-care center in the Dominican Republic for 1,200 children.

George's at the Cove 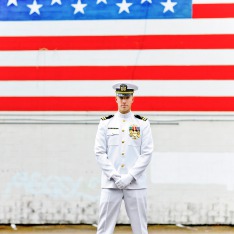